I wasn't sure if I would be able to post this today as my little one has been sick the past few days and much of my attention has been on her BUT I couldn't resist taking photos when she was napping this afternoon (yes poor girl napped a few times today).

Here is the overall view...I have a few changes planned for the future (some wicker baskets will replace the plastic stuff down the road...)

Many of you asked about my new furniture. It was all purchased at Ikea. The desk is Vika Amon. You'll notice we have two. One side is for the kids and one side is for me. Although truth be told I will certainly be inviting friends to share my space too (aka late night scrap night).
The bookcase shelves are Expedit.
Since I live faraway from an Ikea we ordered online. It took way longer than the website first listed. We addressed our concern with Ikea and they mentioned they would amend the site. Originally the site listed 1-2 days delivery. Not the almost 3 weeks I waited!!! As I mentioned I plan a trip to Ikea again in the future to get the small pieces that will "finish" the room off however that won't be until August. Until then I am more than happy with the space.

As far as the paint colour, I honestly don't know the name of the colour (I didn't paint it!). I do know the contractors bought the paint from General Paint (breeze) and that the colour is Behr 700D-6, B34, F4 T4Y. We have the colour in almost every room. It is a beautiful colour in the light but some people who visited my house have told me that in the darker rooms it does seem rather dark. Personally I like it ...but just thought I would share comments from other people too. 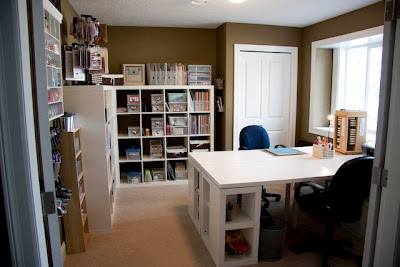 As you can see, I still D-R-E-A-M...and generally speaking the items you see before you were in a similar place in my last room. 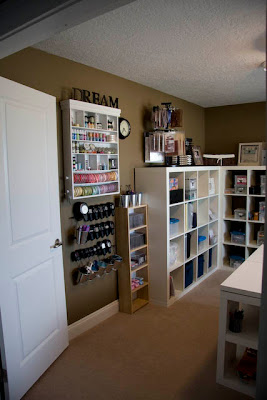 This is a peak at the school side of the room. I have changed it since I took this photo ever so slightly (adding more stuff to that side of the room). You'll also notice NO BLINDS...we are still waiting for them to be made...we ordered the tops down bottoms up cellular shades in white. Which means I will still get plenty of light in this room :) 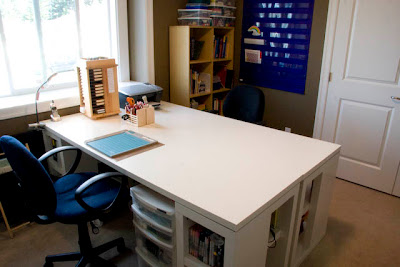 A close up of the shelves... 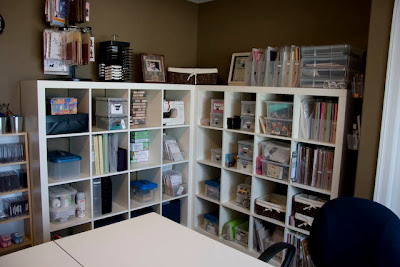 A close up of my dream...who doesn't love glitter, buttons and ribbon? And all those CD folders house PTI stamps and nestabilites. The punch holders and CD shelves were purchased at Ikea. The white shelving unit is by Making Memories and I purchased it around Christmas from Micheals. 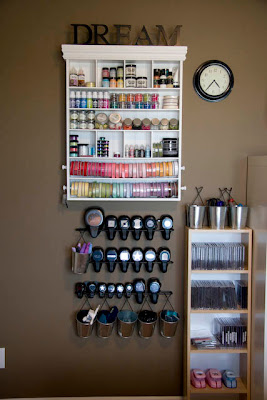 One of the reasons I chose these desk legs was for the storage. I wanted to maximize my storage area as I am officially doubling my craft space as my school space too. You'll note I also have some easy access drawers too. It's great to have the "go to" items within reach. 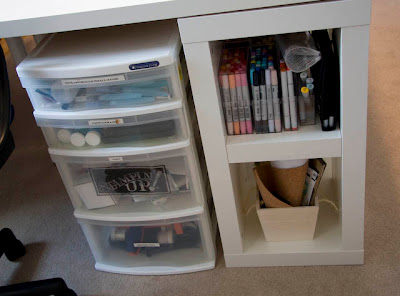 I had a few clear wall containers that I purchased from Ikea last year. I never really used them for much in my last space but was really excited to use this small space on the wall. The way the shelves come together it left a gap at the end of the wall. I had this great idea to store my paper cutters and thickers/stickers in those containers. I will be buying a few more during my next trip and fill up the remaining space. 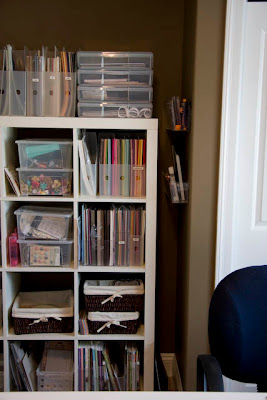 Here is another snapshot of the school space. My son LOVES it! 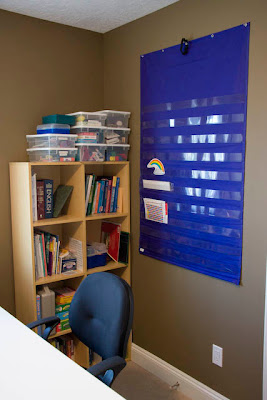 Well there it is...my space. No more excuses now. My 2 month hiatus is officially over. I have a card to share with you (my late Jiffy post) set for Friday morning. I have yet to officially "stamp" something since my move but plan to get in my room some time tomorrow. For the time being, expect some random posts (3+ a week) as I am still working on getting settled, not to mention writing report cards oh and homeschooling. My grandmother will be moving in in just over a month and I have to get all my "junk" out of her space LOL. I made a big dent today but I know it will take some time to find a place for all those miscellaneous items. If you have amazing storage ideas for a garage please share them with me. That is my only hope right now.

What an amazing new room! I bet there will be a lot of creative juices flowing in here. Wish I'd had such a nice room when I was homeschooled. I guess the kitchen table did not harm me too much.

What an inspiring room! Love the wall color! You have done a wonderful job in this space! TFS! Blessings to you!

Your space is fantastic!!!

OOOh alli I'm green with envy!! Lol - what a fabulous space!!! Health to use!!

Looks great Alli! I'm sure you're excited to get most things settled and hopefully you'll have some fun creative time soon!! :)

Gorgeous creative space Alli, I'm sure you can't wait to stamp in there, wish I had a space so wonderful TFS, HuGs Kim :)

Everything looks fabulous! I miss seeing your work.

I love the colors on your walls. I've painted a similar color in my house.

Love your new desks. I haven't been to Ikea in over a year. That desk must be a new design; I've never noticed it before. Glad you are getting settled.

This is a great room, i love to see your cards again and photo's of your "garden".

Oh my, I love your room! I want one just like it! Maybe someday... Looking forward to seeing your creations again now that your room is all set up. :D

I love your room. Where did you get the little buckets?

Thanks for sharing your space. It looks wonderful!

Oooh, a craft/homeschool room! I'd love one of those!!!! :) As for the garage. I have a good friend who bought those metal shelving units from HomeDepot and uses Rubbermaid boxes. The pest control guy told her she did NOT want to use cardboard because brown recluse spiders *love* cardboard boxes. Go with plastic - be it Rubbermaid or Sterilite or some other brand.

You lucky girl...what a great craft room!!! I too will have a new craft area soon. My basement is going through some reno's, my student moved out and I am taking over my basement areas. I will have the big screen TV on one end of my family room and my craft area on the other...so I will still have a view of my big screen TV...LOL. I too will be using some Ikea shelves (I will be going with the LACK bookcase, I think). I might have my neighbour who does woodwork build me a desk/work table to the way I would like to have it. I am really looking forward to when it is all finished. Have fun in your new area...thanks for sharing...take care.

I know it's a sin to be jealous, but it's so hard not to be in regards to this room! It's simply AMAZING! I love everything about it!

What a wonderful space you have for creating! I love it!

What a great space, Alli -- love it! I also like your paint/wall color & furniture. Thanks for sharing!

The room is great! I even see that Janome in there! LOL! best of luck in your new home!
Hugs,
Gina K.

This looks lovely Alli! (and organized so incredibly well!). Thanks for all the deets - always helps me come up with organization and storage ideas for my own room.

Incredible! This could be my "happy place".

Oh, Alli -- can I pleeeeeeease come and stamp with you??? Your space is incredible -- I don't think I'd ever leave it! :)

Your space is graet I luv it. You really put it together nicely.

Gosh Alli, Thank you for all the ideas and inspiration....wow, what a great creative space.
Merrily @ Cabin_B

What a beautiful schoolroom you have! You have the same setup that I am wanting to use in our new soon to be schoolroom. This is our first year homeschooling and it is overwhelming trying to figure out how I want the room to look! Can I ask what size room you have? I can't wait to plan a trip to IKEA!

I am very glad to see such information; resources like the one you mentioned here will be very useful to us. This is very nice one and gives in-depth information.

You have great organizational skills! The room looks beautiful. 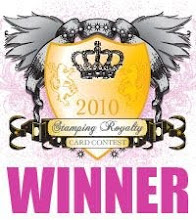